Surgery Q and A

Weekly photo gallery! In the first picture you'll see Noah's buddies J and E who came to visit (with their lovely mommies). However, Noah had his first crib nap of 2 hours (YEA!) so his missed them entirely. Haha. 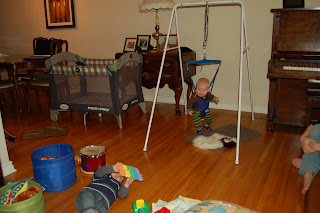 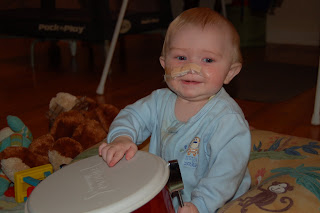 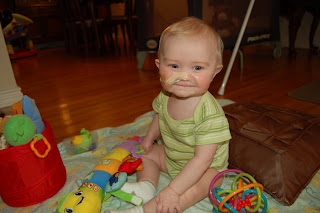 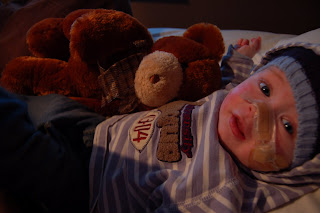 I've been listening carefully to questions we've been asked lately so that I can try to post a response. I'll do my best to answer, but please keep in mind there are a lot of unknowns for us right now. I'm really glad for the questions - keep them coming!

Question: Does Noah have a diagnosis?

Noah has Gastro-esophageal Reflux Disease (GERD). This refers to liquid and/or food that is in the stomach moving back up to into the esophagus. He has some low muscle tone. He does not have the ability to bottle a sufficient amount by mouth. He has oral aversion which results in his unwillingness to eat/drink a significant amount.

Question: What is a g-tube?

A g-tube is a gastrostomy tube. Noah will have this inserted by the surgeon by making a small incision in the skin and stomach lining and placing a tube within the stomach.

Question: What is a fundo?

Question: What is the muscle tissue removal for?

There are still "wonderings" about why Noah had an incomplete suck. He was never able to properly nurse, and he was very ineffective on the bottle. He chews rather than sucks. While his MRI was clear, they want to test his thigh muscle tissue for other neurological diseases that wouldn't show on the MRI. It will take 3 weeks to get the results. We really struggle with having this procedure done - Noah was hypotonic (exhibited low muscle tone) but he is at the low end of normal. He is sitting up by himself!

Question: Will Noah eat/drink after the surgery

Noah's ability to orally eat and drink in something we think in terms of months and years, not days and weeks. We will continue to offer Noah the bottle, cups, pureed foods etc. What he does will depend on his oral aversion, his pain management, etc. etc. It is a marathon, not a sprint run.

Question: Will Noah be "better" after the surgery?

Noah will still have reflux, but he won't be able to throw up. He will still require medication. The fundoplication is not a cure for reflux. We tried all medication options before we considered surgery. It may prevent Noah from vomiting, but the urge to vomit is likely to remain, resulting in him retching. That is where the G-tube comes in, for venting/feeding. We hope that will lessen the amount and severity of retching.

Question: When is the surgery?

Noah will be admitted on June 14 and the surgery will take place on June 15. They tend to perform infant surgeries earliest in the day. He will be in hospital a week or more. It all depends on how quickly he can tolerate his feeds. He will lose some weight in all of this because they will fast him for the surgery and it will take time to get his feeds up.

Thanks for your support and prayers!! Noah is a bundle of sunshine with his smiles and giggles. He is working on his first tooth (sometimes I forget to document the routine baby things) and is doing a beautiful job of sitting up on his own.
Posted by Dykstras at 7:26 PM