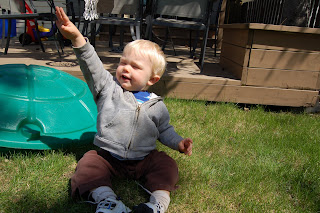 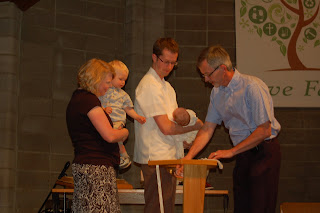 Baptism of Esther Juliana - such a special day. 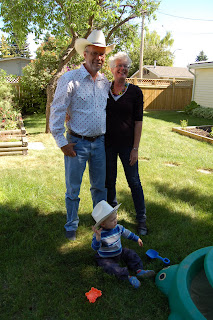 Noah with his grandparents! 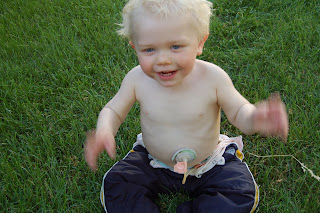 One year with our g-tubie! 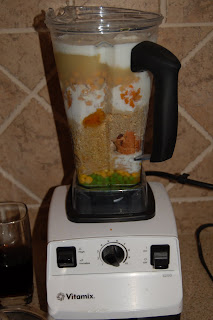 Blending away every 2 days! 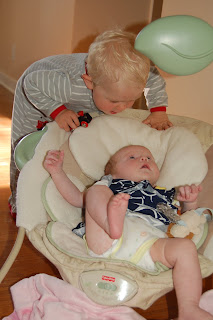 We have entered a new realm at the Dykstra household: the two kid family. It is joyful, noisy, fun and mostly really busy! But since I've been sick the last couple days (pink eye and a cold), I thought I should spend my couch time being a little bit productive! So here is a brief update on Noah. I should say that Esther is doing very well. Her feeding was rocky and challenging but after a formula change (momma's instinct!) and a trial of Zantac (since stopped), she is starting to pick up and do well on the bottle. Praise God.

Here's a little glimpse into life for Noah (and a big thank you for your continued interest, care, love and support in our journey of tube feeding).

Noah did very well with tolerating feed until the end of June. Suddenly he was retching frequently and his behaving was riddled with crying, hitting and generally being upset. I still feel he was teething since as of this week, super happy Noah is back - horray! I love that side of Noah - easy-going, fun-loving and cheerful. The best part is that I see a real change in his retching. I counted maybe 5 yesterday! He is still having trouble napping and tends to wake up at the 30 minute mark retching but he is a good sport about it all so what can we do? We just go with it!

I AM SOOOO HAPPY TO REPORT that we have been able to move Noah to 3 tube feeds a day! As of this past Sunday I have recalculated his recipes, added some extra high calorie ingredients and we are doing well on this new routine. What a change for our little guy. While the feeds are pretty "rich" I believe he is handling them very well! It just creates more normal routines for Noah and for our whole family. Now he spends at least 30 minutes less each day sitting and watching his DVDs. Again, this is a step we have taken without suggestion or without support. We've learned that if you want to go a different direction when tube feeding, you'll likely do it on your own. Thankfully Jared goes along with momma's instincts and I in turn with his. To that end, Jared has helped Noah wean off his Losec (proton pump inhibitor medication). We'll wait and see if Noah shows us any signs of complications being off the meds. He has taken Losec since he was 3 months old so it is a big change for him.

At the same time, we've added in Singular to his daily routine. This is a pill used to treat asthma and it is being trialed for one month as the recommendation of our new pulmonary specialist. We really don't think Noah has any form of asthma but we need to give it a try. We crush it from pill form and add some water to flush it through his tube. The coughing that Noah does is still a ball of confusion for his Drs. and this is another effort to see how he responds. So far, nothing exciting to report....we'll see how it goes.

Noah is learning many new animal sounds and his most used phrase is "what dis, dis, dis?" He also knows "hi" and "bye" but doesn't use any other words. He does however make a ton of sounds and babbles constantly. I love listening to him especially when he is outside in his beloved backyard. He has definitely made some progress, albeit slowly, in the last months.

Mr. Noah has become an expert and pretty fast little scooter! He pulls himself up to stand and shuffle all the time but he is so used to scooting and has figured out it is a fine way to travel that we don't see him walking too quickly. At almost 20 months we just keep watching and waiting - one day he'll get going on his two feet. In the meanwhile, he is so cute to watch scooting around the house and backyard.

Noah had a hearing test in June and the verdict is he is hearing in the normal range. Good enough for me but they want a follow up in 6 months. We'll see what we decide to do.

We are "nanny-free" for almost 3 weeks - we sure miss Marleen but did enjoy a week with Grandma and Grandpa and things have transitioned well for me being a momma on my own during the day. Jared comes home ready to help out with feeding either kidlet so we have a good routine going.

Thanks again for keeping up with our family.

Posted by Dykstras at 1:46 PM No comments: