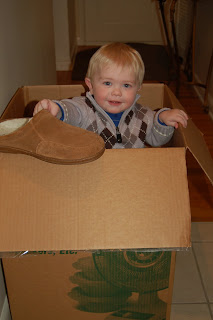 Enjoying the moving process (wearing my sweater from Uncle Nathan!) 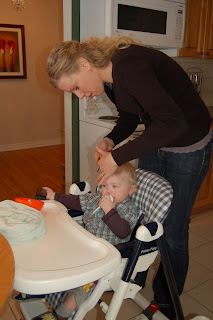 Auntie, is there anything you can't do?
Noah being a very good boy for a haircut by Julie-Ann (it was just too cold and Noah too sick to venture out to Mrs. Deenie's this month for our cut). 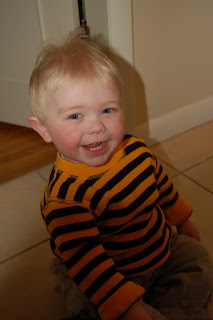 In my last blog, things had improved with Noah. Not more than 2 days after that entry, Noah got what appeared to be another stomach bug. It was complicated by some teething which may explain the constant diarrhea but doesn't necessarily explain his inability to take feed. Retch, retch, retch. We were well worn out by the end of the week.

He was a miserable little bear, screaming day and night, had some very difficult behaviour, and would barely sleep. We were concerned about the intensity of his retching and constant diarrhea that we took him off Pediasure for 24 hours and gave him electrolytes only. The strange thing was, he right away stopped retching! That day was really neat for Noah and I. He played so well, I was able to do much more around the house compared to a typical day. He took the electrolytes so quickly.

The next day, I started Noah back on formula, about half his normal volume, and decided to use the plunger to quicken the feeds. He did well and it gave me confidence to continue to feed him quickly since. That is saving us a lot of emotional energy and time in general when we come to a feed. His bowels settled down and for the last 6 nights, he slept through the night (that's a total first for us!), had some decent naps and hasn't woken up coughing. Now, we recognize that he may easily start having difficulties during feeds and sleep, but we certainly have enjoyed the reprieve.

It was during that period that we had a meeting with Dr. Palmer, Noah's Pediatrician. His thoughts were to return Noah to Neocate, double his Losec meds., refer Noah back to GI clinic, refer Noah to a pulmonary team and complete a sweat chloride test (to rule out Cystic Fibrosis).

We totally disagree with our Dr. on returning to feeding Noah Neocate. Noah retched and retched often on Neocate. We tried it for 8 months, both on 24 hour feeds and bolus. So, we decided to start our journey with blending our own food for Noah. The challenge is appeasing the Dr. and dietitian by showing the nutritional information Noah will receive through his blendarized diet. The frustration is that a typical 16 month old diet would not be calculated so precisely. They would eat 3 meals and snacks each day. In any event, I've put together several basic recipes that meet Noah's current caloric daily intake. My goal is to not get too nutty about all the numbers and just remember that Noah will be getting real food each and every day, and hope and pray it will be something he tolerates well. I'm expecting to receive our Vitamix blender this week and while expensive, it comes highly recommended by lots of tubie parents. We don't want to clog or plug Noah's g-tube so we need a very smooth blend.

As for doubling his meds, we are also opting to leave his dose alone for now. We aren't convinced he even needs the Losec, but it is standard to be on it for at least a year after a fundo. We'll continue to give him one daily dose.

Going back to GI clinic probably won't result in any testing for Noah. The last time we attended clinic was in October and at that point they said they couldn't help Noah further. We'll go back and see if they have anything to add to our plan right now.

The final 2 thoughts of the Dr. (pulmonary and sweat chloride) have to do with Noah's coughing. We still have a gut feeling that his coughing is gastric in nature and is related to feeding tolerance. However, since we have ruled out asthma it is the next logical step to engage a pulmonary specialist to investigate further. Same goes for the sweat chloride test. Noah was tested for CF as an infant but this is a more comprehensive test. April 6 is the date of the test and I'm nervous because Noah is not a willing participant when it comes to Dr. visits and tests. I hope he'll be okay.

The journey continues, the questions continue, the search for a diagnosis continues. We have hope that Noah will continue to take feed quickly and tolerate them well. Clearly, he is a very sensitive little guy as the last weeks have shown us. He seems to pick up stomach related things very easily though doesn't have a lot of colds (a relief). We keep working as a team to support Noah's needs. I can't sing Jared's praises enough, he is an incredible father and husband. I am so blessed.

Pregnancy update: still throwing up, still feeling nausea 24/7 (worst at night), not sleeping much - but as Jared says, still smiling :-) It is hard but the countdown to meeting our new baby is coming soon. That keeps me going.

Moving: thank you for all the offers of help! We are doing well with sorting and packing and have hired movers to do the heavy work. We are looking forward to settling into our new home and are praying Noah makes a smooth transition. He doesn't like change very much so we anticipate a few tough nights, but we hope he'll accept his new surroundings.

Talk to you soon, everyone!
Posted by Dykstras at 7:42 PM